Who can argue with The KING, Alves, and Neymar? The Sand is Key to Development!

Who can argue with The KING, Alves, and Neymar? The Sand is Key to Development!

This is a retread of a partial article written following the United Soccer Coaches Convention introduction of Beach Soccer Educational Seminar.  It has been modified edited and includes information about Eric Cantona, Dani Alves, Neymar and their beach soccer experience:

Beach Soccer which FIFA describes as the “Celebration of the Beautiful Game” got a long-awaited shot in the arm in the United States.  FIFA and Beach Soccer World Wide, based in Barcelona, have been waiting patiently for the sport to grow in North America. The introduction of education by United Soccer Coaches will spark further confidence in the direction of the growth of the game but has also given coaches, directors, and state associations a glimpse at a revolutionary way to improve the standard of play on grass in the United States.

The dinosaurs and closed-mindedness of so many coaches have made a plethora of excuses on why they do not support beach soccer.  But, the reality is people don’t like what they either do not understand or know how to do.  This was the same fate of futsal for years as they professed it’s potential for player development on death ears until a few generations of players have played, become coaches, and now made it everyone’s favorite flavor after years of trying to break through the closed doors of people’s minds.

This article illustrates why it should not take as long and could have an immediate impact on any team returning from the lapse created by Covid19 as they look for the quickest and most efficient ways to get their players back on track on the grass. 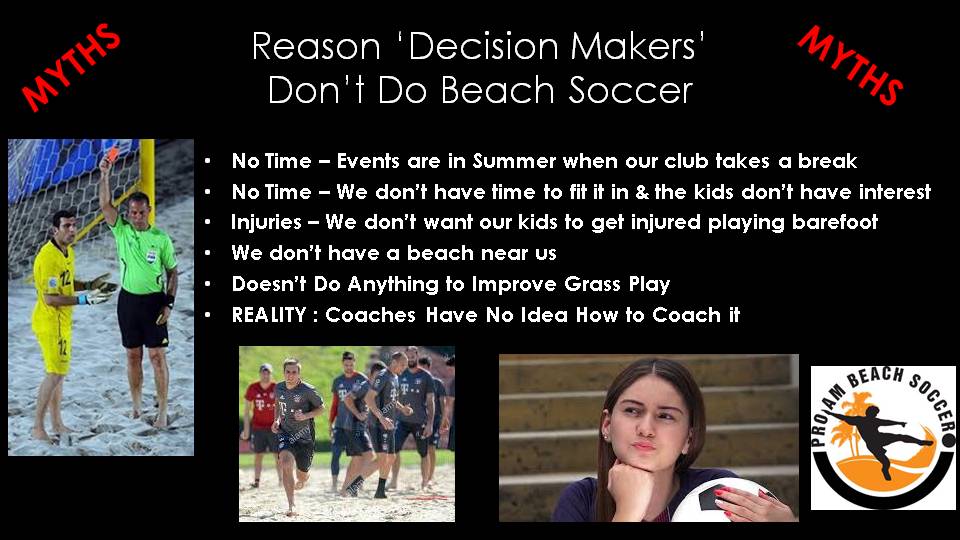 The shift to include beach soccer as an educational tool by organizations has also been well received in state associations as executive directors and/or their representation came away looking to be part of the US Beach Soccer National Championship in 2018 & 2019.  It presented opportunities for state associations to add to their offer to clubs and players to develop.  They now have a reason for coaches to train their players in this medium and to increase their soccer acumen exponentially.

The session in Chicago in 2018 covered a large range of subjects important to the sport.  It began simply with “Why Beach Soccer” which clearly defined the expediency in which coaches can take advantage of the S.A.Q.’s (Speed, Agility, Quickness) not only more creatively, but much quicker than any avenues they have explored previously.  For example, the idea of “Running in High Heels” which I have been touting for years is a perfect example of how a player builds and strengthens tendons and fast-twitch muscle fibers to make them faster and stronger when returning to grass.  It makes them much more durable and does it way faster with less negative impact on the body.

Facts in the Sand: 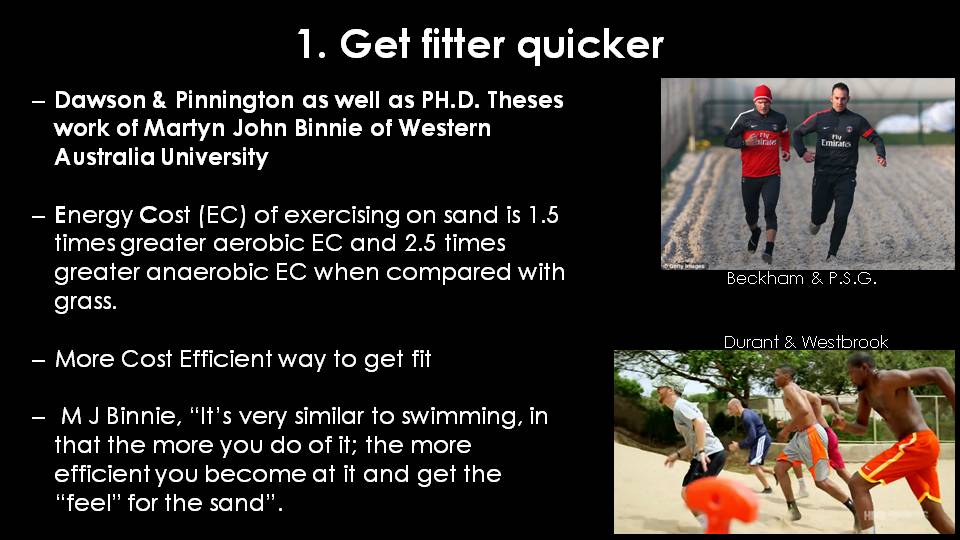 The session addressed the emphasis of the last decade of moving away from flighted balls to the “tiki taka” short controlled passing game. This inevitably has led to players losing composure to address the ball in the air.  We all want our players to play in tight possession.  We also have a clear sense of reality, when kids, in particular, are under pressure, they put the ball in the air.  This is especially if a wide player is looking to unload a cross.  Coaches themselves proclaim, “If in Doubt…Kick it Out”, but then don’t work on the results of that comment.  We don’t emphasize it nearly as decades gone by.  It’s seen clearly in the United States as a major deficiency.

In addition, in the United States, due to fears about head injuries, you must be at least 12 years old before heading the ball is allowed in a game.  At an earlier age, it now results in a free kick against your team from the spot of the infraction.  But still, while some clubs have adjusted, most have ignored the void.  They have not addressed the ball flying in the air towards them.  Beach Soccer revolves around mastering the skills of all parts of the body addressing this very dilemma.

Brasil is Brazil for a Reason

But, don’t take our word for it.  Why don’t we simply look at what one of the legends of Brazil has to say… 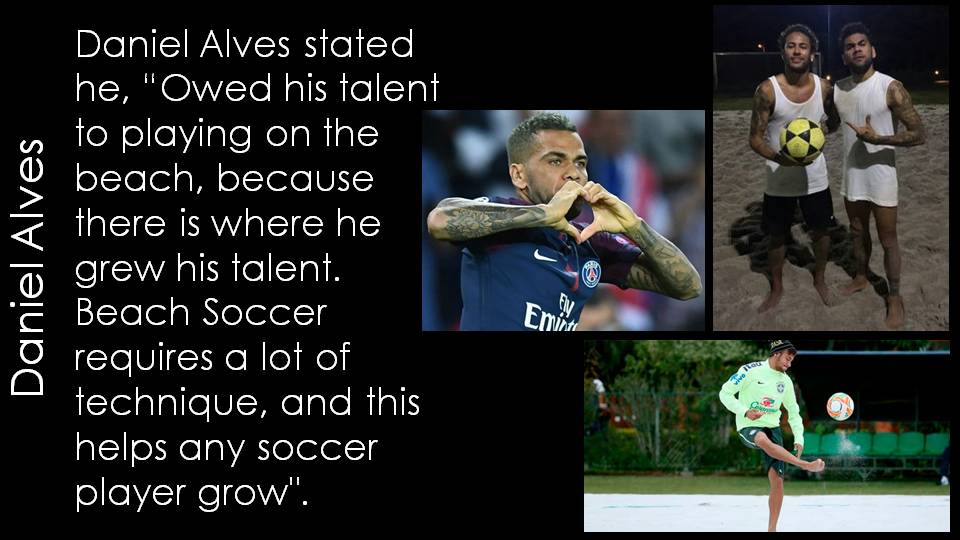 Dani Alves and his close friend Neymar are huge enthusiasts for sand.  No matter what you feel about Neymar in recent years there is no denying how amazing each of their skills.  Clearly playing footvolley and developing technique, skill, and mastery have made them near the best in the game.

No One Dares Doubt “THE KING”

If two of the most recognizable Brazilians in the modern era are not enough.  Here is one for all the dinosaurs who simply cannot deny THE KING!  Yes, Eric Cantona is without question one of the most famous archetypes of an amazing generation of players.  If old enough to remember they created the most amazing stories which created so many fans, players, and coaches.  It is much the reason why we have in record numbers in the game today.  “The King” recently spoke with one of beach soccer’s best (Majer of Portugal) about winning the Beach Soccer World Cup.  Cantona said “Was one of the best moments in my life”.  Read Article here: Eric Cantona discusses Why Winning World Cup was so Important. (The Beach Soccer World Cup, btw…)b 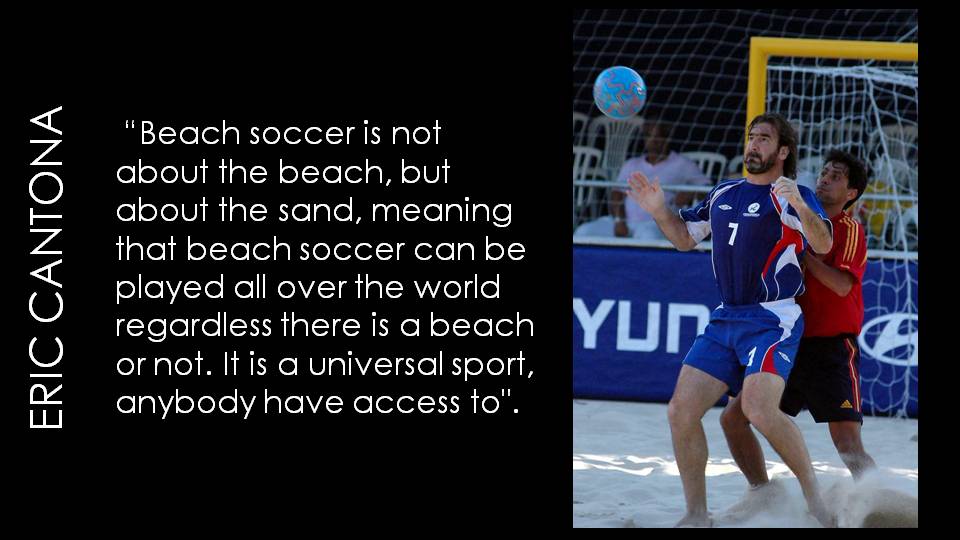 In conclusion, we will continue to put out the facts.  Don’t worry about getting your team back on track after so much time off.  You should not worry about building their durability, strength, speed, or even broadening and developing better techniques.  It will be quicker than you have ever seen before with your group.  Open your mind.  Put your player’s feet in the sand.  Results are guaranteed.  Not to mention, your players will thank you as they have more fun than you imagine.  Need ideas… See YourBeachSoccer on how to train on beach volleyball courts.  Yes, you don’t need a beach, it’s like THE KING says, “It’s about the sand”.

How to Beat “the Covid19 Lapse” with Self Branding

How Conditions in Grass Scream for Beach Skills!