We are now more than halfway through the year and the world still finds itself learning how to navigate through this pandemic. The United States has witnessed an attempt of multiple professional sports making a return, with mixed success. Witnessing this gives the beach soccer community hope for a strong return to the beach soon. Although we have not been able to host any tournaments this year, we have seen other leagues and organizations begin to practice and play around the world using new safety guidelines.

Beach Soccer Worldwide hosted its 10th episode of Beach Soccer Talks in early July. Joan Cusco and other BSWW speakers announced the upcoming plans for beach soccer tournaments. A highlight of the talks was the EBSL Promotion Final in Division B in Moldova which consisted of 4 groups of 16 teams. The top team of each group will qualify for Division A followed by the EBSL Superfinal Division A held in Portugal with 12 teams.

The Women Euro Winners Cup will have 8 teams of 2 groups, and the top team of each group will play in the final. Though dates of these events are scheduled to be in mid to late August and September, official dates have not been confirmed due to the ongoing battle with the COVID virus. Joan commented on wanting to see beach soccer up and running again, but the safety of all players and coaches involved is what he sees as most important. 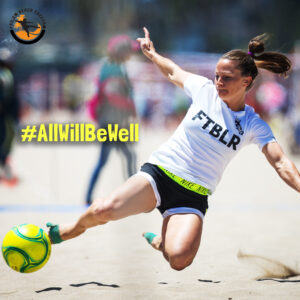 Looking ahead toward next year’s Beach Soccer World Cup which will be held in Russia.  The qualifiers will most likely be carried out in a short time span due to the uncertainty of when it will be safe to host.  If it will give teams adequate time to prepare for the World Cup is uncertain but time will tell and we are confident BSWW will have everyone’s best interest at heart.

Under the direction of Coach Mateo Marrucci, the German National team has begun their practices. Before holding in-person team practices, the coaching staff conducted video calls with the team to remind them of the philosophy and mindset needed for the upcoming season. Coaches also focused on individual player outreach with video calls to allow them to strategize about their respective positions. Following the safety guidelines, all the players and staff have been tested and returned, negative. Now they are able to turn their attention to preparing for the Portugal Superfinal with the expectation to play September 1st. Although the date is not solidified, the team is doing all they can to prepare.

In the domestic level for Germany, the German Beach Soccer League will kick off on August 8, 2020 with 12 teams, 4 of which will reach the Final Four round (September 26th -27th). This league was originally set to begin in May, however, due to COVID had to be postponed. Now after following the safety guidelines previously mentioned, the league is ready to kick off without spectators.

In Hungry, BSC Aramis have won both the Hungarian Cup early July and Super Cup in early August. For the Hungarian Cup, legendary Llorenc Gomez was the top scorer of the tournament. Llorenc led the BSC Amaris in the defeat against Goldwin Pluss. The following tournament Llorenc was appointed a coaching position with BSC Amaris to help lead them to victory in the Super Cup. The final game in the Super Cup ended with BSC Amaris coming on top of Energy SC  7-3.

The Czech Beach Soccer Championship was completed in two phases of weekend games (July 11-12 & July 18-19), with the final four held on July 25th-26th.  The men’s division had 8 teams, which saw BS Bohemians 1905 defeat BS Salvia Prague in the final. On the women’s side, they had 4 strong teams fight for the championship. BS Slavia Prague won the tournament, walking away proudly undefeated.

In Belarus, the Belarisu Beach Soccer league continued their league and witnessed SDUSHOR claim their first title, and on the women’s side, BRSM won the Women Belarus Cup.

Leagues and tournaments around the world have different conditions, which allow some to return to play, but what remains most important is to follow your local guidelines and restrictions to upkeep player/staff safety. Many teams around the world are training virtually and keeping socially distant, such as the Women/Men US Beach Soccer with Francis Farberoff. Until we can make a safe return here in the U.S., teams can follow their example to stay mentally and physically prepared as everyone highly anticipates the return to the beach.

Growth of PABS Over the Years