Chicago Disaster Avoided By Huge Diving Save by Waukegan

Chicago Disaster Avoided By Huge Diving Save by Waukegan

In 2019, the Illinois Youth Soccer Association went into a partnership with Pro-Am Beach Soccer after a string of very difficult events which caused more trouble than it was worth to keep going at it alone.  Two years in a row the Sunday edition of the event was rained out as the heavy summer rain would rise above the sand and become an extension of Lake Michigan at Montrose Beach.

In the agreement, PABS agreed to work with one of the disadvantaged youth clubs in Chicago this ended up being the Lions Club who was originally born out of programming by the ILYSA to promote more participation from inner-city play.  About 10 days before the event they called and informed us the beach was already underwater and the event was about to be over before it even started for a third straight year.

The desperate move was to contact every beach and examine all the best possibilities available in such a short amount of time.  After we had to rule out 41st Ave closer to the south side of Chicago due to complaints we contacted several heading north and it is when I first contacted Kathlyn Dibble in the city of Waukegan about 40 minutes north of downtown Chicago.  We were 10 days out, teams signed up waiting for word, and she immediately put us in touch with the decision-makers.

It was a matter of hours and a few short days the entire event was moved north to the city of Waukegan.  When we arrived we met the local guru of city magic David Motley at the beach.  At first sight, we were nervous because the sand looked very wet and he informed us they had trenched the shoreline to actually drain the beach so it was not covered like Montrose Beach.

The first day of the event started on time and went smooth from the very early morning all the way up to about 3pm when the dark clouds began to form in the sky and everyone knew what was coming.  About 3.30pm the thunder started to roar and sprinkles began. 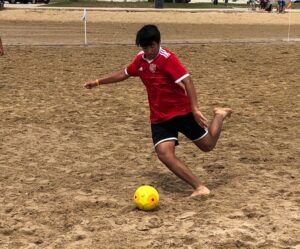 The first strike of lightning we saw was about 3.45pm and all players were removed from the beach.  We then started the stopwatch for the mandatory 20 minutes between strikes.  At 18 minutes came the next strike, then 17 minutes, and then 19 minutes and the day was gone and all the finalists became champions as we could not continue.

As we took things down for the day the rain started and by the time we got back to our hotel, it was like a tropical rainstorm where you could barely see outside the windshield.  It came down for about 90 minutes and then the skies opened up again, the sun shone, and we made our way downtown to the arts and wine festival in town.

Everyone in town was so welcoming and excited about having us there especially when they realized how far we came and especially as many had no idea the event was taking place since it was so last minute.  Many of the artists and locals we encountered came down the next day, in fact, to see the event and visit with us.  We were taken by how friendly everyone was.

While roaming David Motley let me know he had been down to the beach to prepare with the city engineers on what was going to be done.  I was a bit confused by what he was talking about until he showed me the pics he took of the beach engulfed by Lake Michigan like every other year in Chicago.  But, no fear, this is David Motely and as everyone we met in the city told us in the art community, he is the man that gets things done!

The next morning we arrived a bit early to survey the damage and it was tremendous.  They had been out on the beach since 5am pumping water and moving sand to raise the level of the beach.  It still was in really bad shape and the crew was working hard to make it not the third year in a row.  When 9am came along for the first kickoffs of the boys days on the beach all games started on time.

The day turned out amazing as we were testing new technology much like Pokeman Go for videos we were taking through our app and the sun shone all day making it a perfect day of high-level competition amongst the boys.  It amazed all the teams who played that day to arrive to see the remnants of the Lake Michigan invasion to being what everyone would hope for. 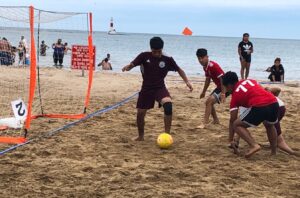 As an organization that has worked with cities all around the country and with several cities around the world, we must admit we have never had a city to go to such lengths for us.  We were taken by the local population’s support including the lengths the local YMCA worked with us last minute when our trainer backed out with the move to Waukegan.  Mercedes Garcia from the “Y” and others came out as well and continued to show this small town in upper Illinois has something special going on.

Waukegan, Illinois gets the “Save of the Year” award! 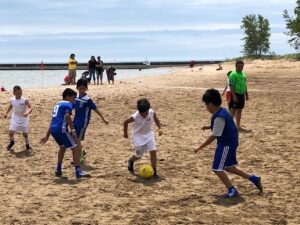